“Cold is the night when the stars shine bright.” So one saying goes, and though the stars themselves aren’t really shining brighter in the cold, there’s some truth to the old adage. Cold nights sometimes make for clearer skies since cool air can’t hold as much moisture as hot air can. And, in wintertime, the stars that we are facing are brighter-burning than the ones we face in summer. Thanks to these radiant winter stars, you might even be able to make out traces of some of the beautiful winter constellations, even in the center of the light-polluted city. Indeed, winter is the season for stargazing. 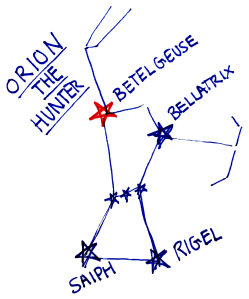 Orion visits our night skies this time of year and makes sure you can’t miss him. He sports some of the brightest stars in the winter sky. Orion is a hunter, lunging forward with his sword drawn for a fight. His right knee is Rigel, and his left knee, which is not quite as bright, is called Saiph. At his right shoulder is the star Bellatrix. His left shoulder is the conspicuous Betelgeuse, a red giant.

Another bright red giant, Aldebaran, is the fiery red eye of the bull, Taurus. Within the Taurus constellation is the Pleiades star cluster, whose 7 brightest stars are the muses that Orion pursues forever across the night sky. And Sirius the dog star is the brightest star in the night sky, Orion’s loyal pup who will stick around and be visible all winter long.

There are plenty of bright stars that you can see from within the light-polluted city, but it’s hard to identify which is which when you can’t see the dimmer stars near them for reference. The best way to fix this issue is to go somewhere more remote. But if you can’t get away, there are astronomy apps out there that will tell you which stars you’re looking at when you point your phone at the sky. Once you have identified one or two stars, you’ll be better able to guess at the surrounding ones. Physical star charts are an even better tool, especially if you want to start to learn to identify the stars on your own. You should also get away from nearby lights as much as you can—it’s not just the glow of the city as a whole that affects your eyes—the lights immediately surrounding you also affect your ability to see stars since they change the way your eyes adjust to the darkness. If you have lights on even in your own backyard, turn them off. The pros will even read their star charts by a red light because the less energetic, longer wavelength has a much less significant effect on your eyes.

If you can get away and want to make a night of it, Broemmelsiek Park Astronomy Site in St. Charles is the perfect spot. It’s open to stargazers 24/7 and since it’s dedicated to looking at the stars, the light pollution is purposefully limited. The Saint Louis Astronomical Society (SLAS) is another great resource. This group holds frequent events that are free and open to the public. There’s no need to sign up ahead of time, either. You just show up and get ready to learn—educated members of the group are there to answer questions, and they’ll let you use their telescopes. They’ve even donated some telescopes to the St. Louis Public Library system, so you can check one out and use it on your own.

It just so happens that we in St. Louis are at the same latitude of Ancient Greece. So as you look up at the mysterious constellations, don’t let it slip past you that you’re seeing those stories play out across the night sky exactly as the Greeks did when they first told the tales of the stars. And even if you don’t study the stars in great detail, don’t forget when you step outside and start to shiver: the clear skies of a cold night are perfect for turning your eyes upward.